What is Sneak Circuit Analysis?

Sneak Circuit Analysis is a vital part of the safety assurance of safety-critical electronic and electro-mechanical systems.
Sneak conditions are defined as latent hardware, software, or integrated conditions that may cause unwanted actions or may inhibit a desired function, and are not caused by component failure.
Sneak Circuit Analysis (SCA) is used in safety-critical systems to identify sneak (or hidden) paths in electronic circuits and electro-mechanical systems that may cause unwanted action or inhibit desired functions. The analysis is aimed at uncovering design flaws that allow for sneak conditions to develop. The sneak circuit analysis technique differs from other system analysis techniques in that it is based on identification of designed-in inadvertent modes of operation and is not based on failed equipment or software.
SCA is most applicable to circuits that can cause irreversible events. These include:
•         Systems that control or perform active tasks or functions
•         Systems that control electrical power and its distribution.
•         Embedded code which controls and times system functions.
Sneak conditions are classified into four basic types:
1. Sneak paths - unintended electrical (current) paths within a circuit and its external interfaces.
2. Sneak timing - unexpected interruption or enabling of a signal due to switch circuit timing problems which may cause or prevent the activation or inhibition of a function at an unexpected time.
3. Sneak indications - undesired activation or deactivation of an indicator which may cause an ambiguous or false display of system operating conditions.
4. Sneak labels - incorrect or ambiguous labeling of a switch which may cause operator error through inappropriate control activation.
Typically Sneak Circuit Analysis has been advocated by the defense and aerospace communities and current standards and guidelines include NASA's Sneak Circuit Analysis Guideline for Electromechanical Systems (PD-AP-1314) and AIAA's Performance-Based Sneak Circuit Analysis (SCA) Requirements (BSR/ANSI/AIAA S-102.2.5-2xxx).

SCAT (Sneak Circuit Analysis Tool) is a Windows program used for automatically identifying potential sneak paths (i.e., paths which inhibit desired functions or cause undesired outputs) by processing circuit schematics. SCAT has a modern easy to use GUI that automates both the preparatory work and the actual analysis that are part of SCA. When user input is required (such as identifying ports) the GUI clearly prompts and offers automated menus that induce a streamlined and smooth work experience.

SCAT differs from conventional SCA (Sneak Circuit Analysis) techniques in that the latter are based upon the generation (usually automated) and analysis (mostly manual) of network trees to identify sneak paths. In contrast, SCAT does not require or even make use of the traditional network trees.
The automated procedure provides the design engineer or reliability analyst with a simple yet powerful tool for rapidly identifying and correcting sneak paths. The automated procedure is based on the fact that sneak paths involve circuit components which can conduct current in either direction depending upon the switching state of the circuit. SCAT exhaustively searches for these bidirectional branches, which is more readily automated than searching for specific topological circuit patterns, as done by conventional SCA techniques. Furthermore, the analyst's task is reduced to evaluating the significance of specific potential sneak paths rather than applying "clue lists" to circuit patterns for identifying the sneak paths.
A significant issue that arises is the assurance that sneak paths associated with interconnecting assemblies or subsystem interfaces are not overlooked. This issue is addressed in two ways. First, the system compels the user to identify each interface port of a switching circuit in terms of it being a power input. Interfaces to power and ground are labeled as such regardless of whether they respectively go to power and ground directly or through switched or un-switched loads, and they are included within the sneak path search. SCAT was developed to enable design engineers to perform SCA early in the project life so that problems can be corrected early and at minimal cost.

There are three steps in using SCAT: preparation, analysis and evaluation. These tasks have been automated utilizing a concurrent engineering environment comprising the EDIF 2.0 netlist file format for schematic capture and the SCAT software. 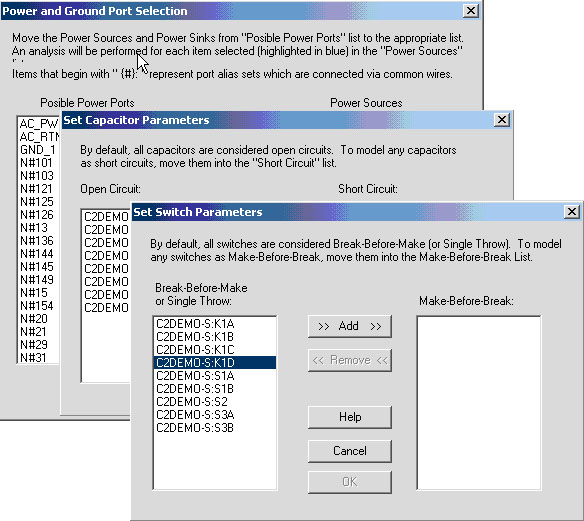 SCAT can perform sneak circuit analysis with a single command. A printable session log (audit trail) describing all actions taken by the user during the analysis is stored and can be printed out as analysis documentation. The user can easily change the input parameters to SCAT and rerun previous analyses. The first step is performing a sneak circuit analysis which identifies all the source to sink paths and among them finds all the bi-directional paths. The next analysis is the power-to-power analysis which finds all the source-to-source and all the sink-to-sink paths which are, by definition, bi-directional paths. 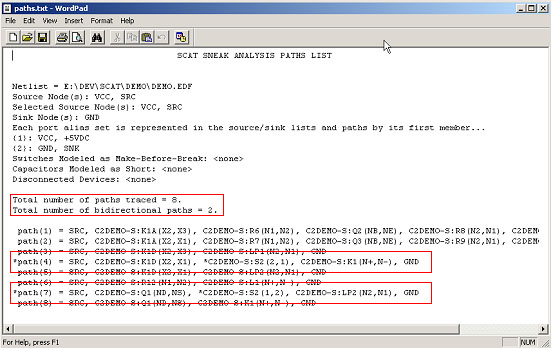